See the van parked in front of the middle store? Yep, that's mine. And I'm in there often enough that the manager recognizes me. The last 5 packages I sent out have tasty goodies included! Enlarge the picture and you'll find that Fannie May candy is situated between a vitamin shop and a denture dental clinic...too funny!

I received an e-mail from Marsha saying that she had received her package yesterday, so I figured I'd better get online today to share the second half of the packages I received in June. Bad me, I know... Theri has reminded me several times that I have not blogged since the end of June. I do apologize to all of you who weren't previously mentioned and it is time to "catch up". I have kept track--you've been very busy. I thank you all and now I'll show the rest of my goodies: 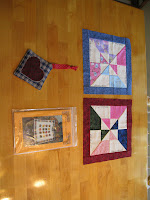 Marsha's blocks came with her ornament and a pattern. She and Katie may be hinting that I need to work on something smaller so that a project gets done? I'm in agreement and thinking the same thing!

By the way, I have taken this shot into Paint Shop and rotated 3 times...it still comes up this way, so I will have to accept that I need practice. I even used SnagIt and came up with this same rotation. I give!!! 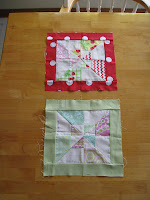 What a contrast when Karen's blocks came....don't you love the polka dot border? Hmmm...that picture came out right?!


And Kathleen's blocks with fabric to add 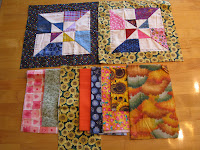 to the stash. One of the major things I learned with this swap is to "think outside the box". These fabrics are wild & great! I think I became a little less conservative as time went on... 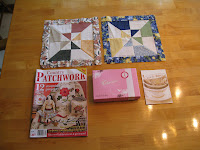 It took me a few minutes to even open Ann's package because I was SO amazed at the number of stamps on the package! A lovely magazine and yummy chocolates for a good cause. Aren't the borders beautiful? 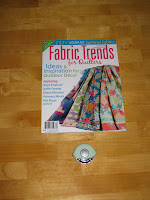 nt blocks...and then another package. Another lovely magazine (one I've never checked out before) and a "deckle cut" rotary cutter.
It took me awhile to figure this one out.... 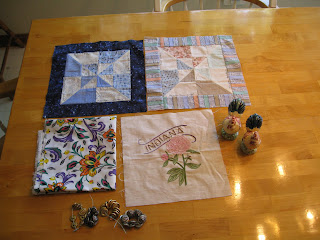 washing? This was the paper cutter she used for the edge!

Later, she sent a box of great finds from her "searches". 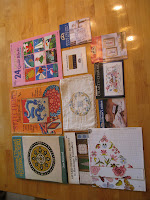 Many of these crafts are hard to find these days.

And alas, another picture on its side! Maybe "blogger" is trying to tell me that I have run on enough?

Once again, I thank you all for your wonderful packages.

And since I already know what the next blog will be...I will not be away so long! Mary